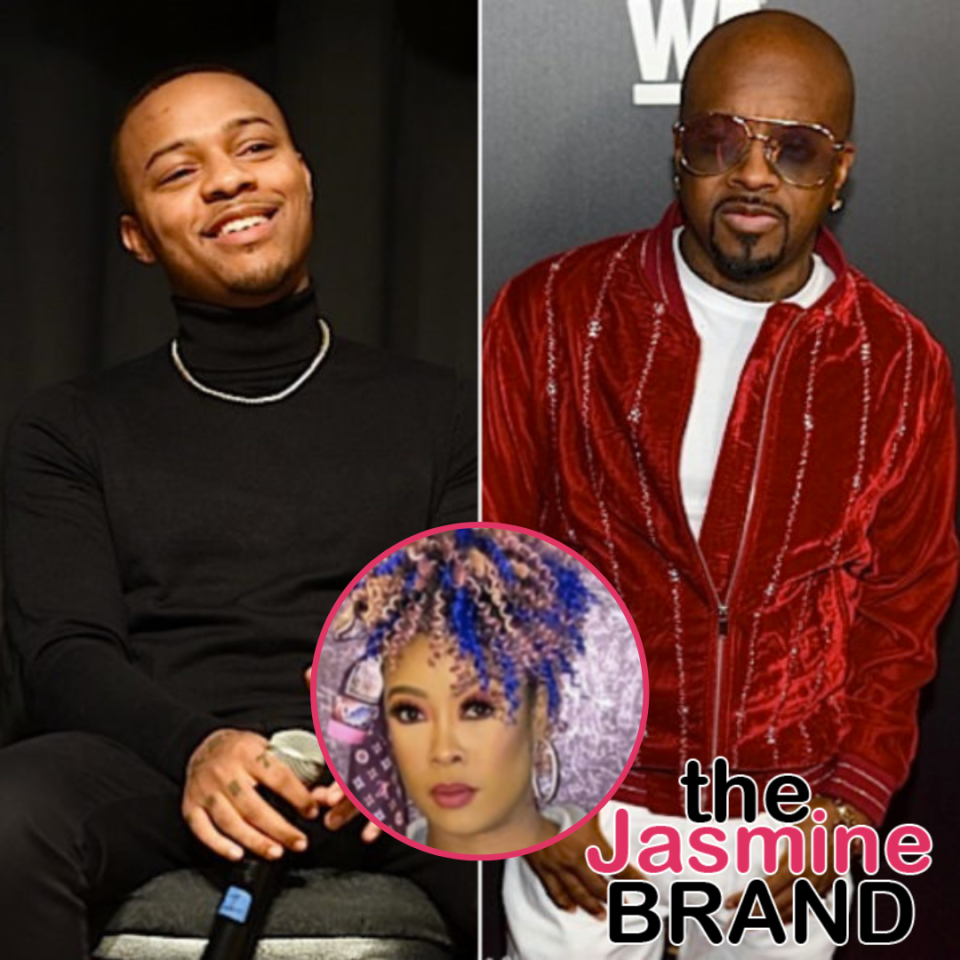 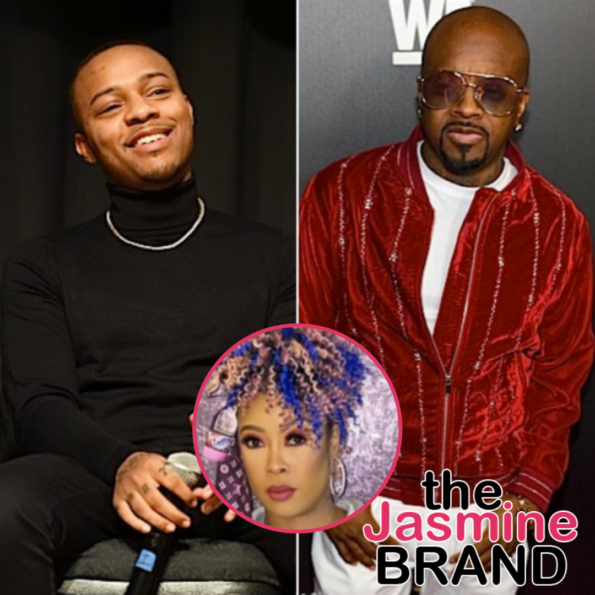 Bow Wow Tells Jermaine Dupri “Stop The Cap” After Producer Claims He Created 106 & Park For Him + Da Brat Chimes In: You Are Being So Rude & Disrespectful To The Person Who Believed In You

Looks like Bow Wow is once again taking shots at his mentor Jermaine Dupri.

After the music producer stated in a recent interview he created 106 & Park for Bow Wow back in the day, the musician had a less than thankful response. However, Dupri’s former artist and longtime friend Da Brat came to his defense, slamming Bow Wow for his “ungratefulness” and “disrespectfulness”. 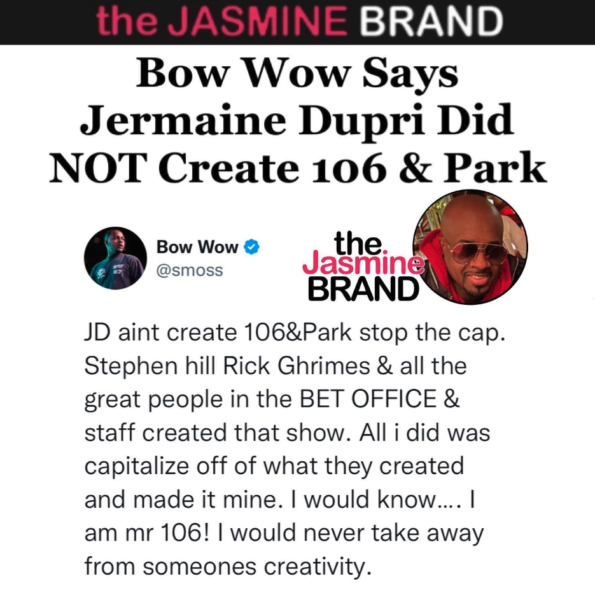 All the drama began after Dupri spoke about the creation of the legendary music video TV show 106 & Park that aired on BET in 2000. The So So Def founder claims he realized the idea of the series before it was created and green-lit for production. He stated:

Wait what?? Jermaine Dupri says he created 106 & Park, and it was bc of Bow Wow?? pic.twitter.com/ocHn5pv3Vk

“So I called Stephen Hill and I was like ‘yo I got an artist, we need to make a show just like TRL’…they wasn’t gone put Bow Wow on TRL like that cause he was a rapper…he was a Black lil young boy rapping, but he was also 12 years old. Nobody on TV was 12 years old anywhere creating this type on pandemonium…I called Stephen Hill and said…’we need a show on BET that shows Black artists like this’”

Though one would think Dupri’s words about his former protégée would pull his heart strings, it seems the exact opposite effect happened. After watching the clip, Bow Wow, real name Shad Moss, responded:

“JD aint create 106&Park stop the cap. Stephen hill Rick Ghrimes & all the great people in the BET OFFICE & staff created that show. All i did was capitalize off of what they created and made it mine. I would know…. I am mr 106! I would never take away from someones creativity.”

Bow Wow and Dupri have seemingly had growing tensions over the past few years, with most heated energy coming from Bow’s end. Earlier this year, the rapper claimed that all of his albums with So So Def, mostly written and produced by Dupri, are “mid”. Additionally, the Millennial Tour performer went on to state that fellow rapper Snoop Dogg is actually the best thing to happen to him musically, adding “thats the only big homie I got”. Bow did later state that tough he and Dupri have no work chemistry and haven’t collabed in 10 years, there’s no beef between them.

Despite their own private issues, fellow So So Def label-mate Da Brat says Bow’s words towards Dupri were just downright out of line. Da Brat, real name Shawntae Harris-Dupart, stated:

“Man wtf?! I really don’t have the time or patience for this sh*t but I got BOTH TODAY. Bow what I can’t letchu do is discredit my big brother JD who u called your dad for so many years cuz that is pretty much the roll you gave him and instead of saying hell no, he rocked w it. You are being so rude and disrespectful to the person who believed in you, nurtured you, made you a complete star, wrote all yo hits, accepted the challenge when Snoop brought you to him. He has never done ANYTHING to you but help. I ain’t finn letchu drag the most non confrontational person who loved, cared for u and spoiled yo a** for years. He isn’t and never would discredit BET execs.   He discussed creating 106 b4 it was created so black people could have our own TRL. NO CAP! If this is whatchu wanna do…LETS F*CKING Go! Pull up lil ni**a witcho disrespectful a**. So ungrateful.” 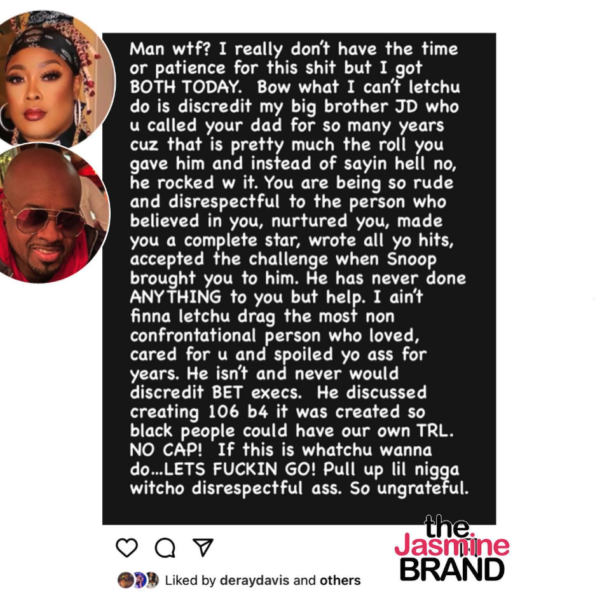 “@shadmoss You really on some BULLSH*T RIGHT NOW. Now u KNOW I got ALL da receipts and know the WHOLE stories to ALOT ALOT! Don’t do this. Respect a legend. Respect a cultural icon. Respect the person who made your career what it is. I’m asking you now to please stop. I’m sorry @jermainedupri I cannot be silent about this sh*t any longer.”

It doesn’t seem Bow nor JD have responded to Da Brat’s post at this time.

Do you think Bow Wow’s reaction to JD’s comments were disrespectful? Let us know in the comments section!

Update: Ex-Minneapolis Police Officer Thomas Lane Sentenced To 3 Years In Jail For His Role In The Murder Of George Floyd