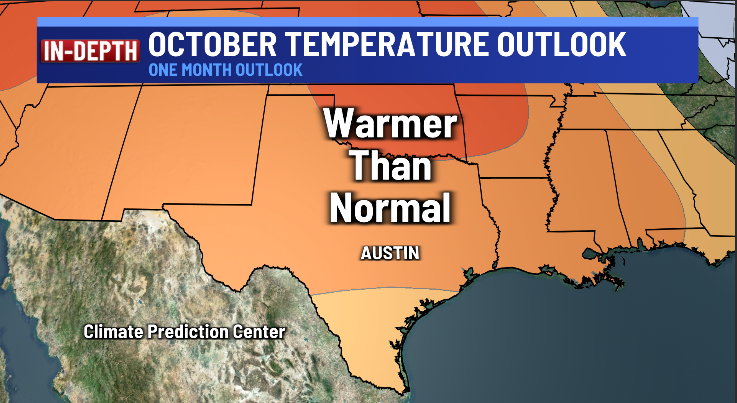 AUSTIN (KXAN) – After wrapping up one of the driest and warmest Septembers on record, the pattern of warmer and drier weather looks to persist into October.

On September 30, the Climate Prediction Center updated their earlier October forecast, which largely kept the warmer and drier outlook in tact for Central Texas.

Normally, October is a wet month falling right in the middle of our second “wet season” which runs from September through November. Drier than normal in October doesn’t mean no rain, but it would mean during a time we typically replenish our water supply, we might not have that boost ahead of the drier winter months.

The Climate Prediction Center have also recently updated their drought forecast for the rest of 2022 and it’s not good news for Central Texas, even after recent improvements in the drought.

The drought is expected to persist or get worse throughout Central Texas.

The latest Drought Monitor showed one-category worsening of the drought, mainly in Hays and Caldwell Counties, with most of the rest of Central Texas remaining unchanged from last week.

Stay with the First Warning Weather team as we take you into what is typically our second wettest month of the year.

Texas Thanksgiving travel will be slightly higher than 2021