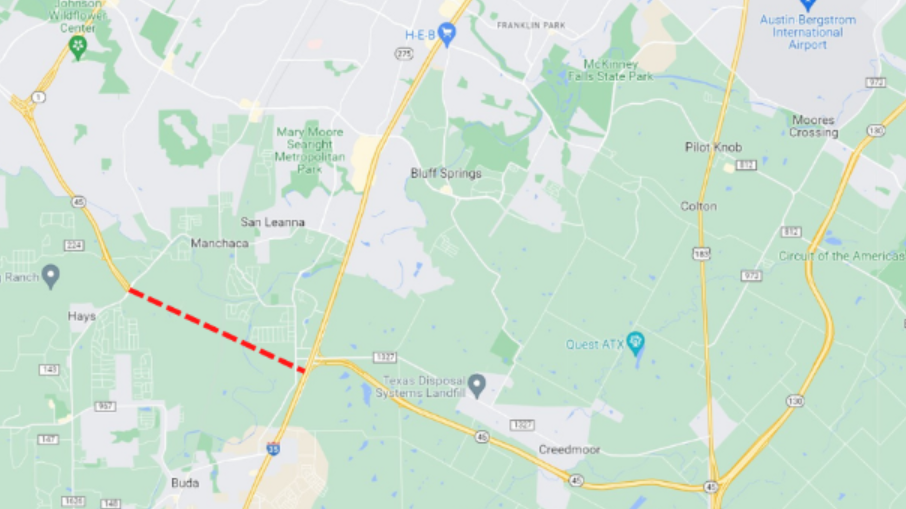 HAYS COUNTY, Texas (KXAN) — The State Highway 45 expansion project is getting some pushback.

The project, that would complete the SH 45 loop around Austin, is raising concerns with the Travis County Commissioners Court.

On Tuesday, commissioners voted to send a letter documenting their frustrations and urging Hays County Commissioners to stop any action on the project.

Travis County Commissioner Brigid Shea said they were never part of a discussion about this project with Hays County.

She said that’s a problem because Travis County residents are directly impacted by this expansion.

“I can’t imagine any of our constituents would be happy to wake up and discover that an enormous amount of truck traffic and the crush of traffic on I-35 has been re-routed on to Mopac,” Shea said.

Commissioners cited both traffic and environmental concerns in the letter.


More security lighting to go up in east Austin

In response to the letter, Hays County Commissioner Mark Jones said it won’t create any more traffic than there already is on MoPac.

“What it will do is relieve the pressure on 1626 and some of these in some of the eastern parts of the county that will have that connection between 1626 and 35,” Jones said.

Jones said he understands their concerns but that this is an important project for Hays County. Hays County Judge Ruben Becerra said a joint discussion between the courts is long overdue.

“We can roll it back, stop it, and get the communities involved and hear from them,” Becerra said.

At the next meeting, Becerra said he plans to discuss the letter from Travis County and figure out the next steps.

Austin ISD’s interim superintendent could leave for another district